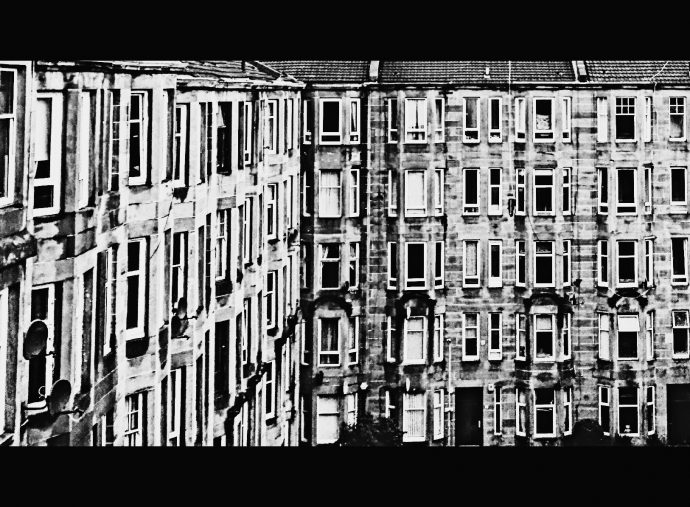 Although Closed Doors is a fictional piece, it was inspired by real life events. While living in one of the most vibrant yet notorious areas of Glasgow I was used to a significant police presence but one afternoon I came home to find my street evacuated and cordoned off by officers with riot shields and dogs. The image of the diverse residents of the block gathered behind police tape with no idea as to what was going on was, struck me as a powerful one.

The neighbourhood has acquired a reputation over the years: several taxi drivers told me they wouldn’t stop in the vicinity and living and working locally I heard astoundingly prejudiced views openly voiced, blaming the problems of the area on the large Roma population. My personal experiences with Roma people has always been positive: from the kids who decided to join me and my dogs for a walk in the park to the woman who helped me when I fell off by bike and skinned my palms. I volunteer in the community and during the research for this project interviewed local shopkeepers and residents. Despite the relatively bad press the area gets I still believe that like anywhere else which ranks as highly on the government’s Areas of Multiple Deprivation Index, the majority of people who live here are just ordinary folk trying to get on with their lives.

At the last count there were 52 nationalities and 32 languages spoken in the square mile which makes up the neighbourhood and a local charity once described many residents as living in a “communication vacuum”. This surprised me as I lived near the high school and was accustomed to hearing broad Glaswegian accents coming from the mouths of young people of a huge range of ethnicities. It was the combination of the evidence of open intolerance and thought of the isolation of more senior residents which planted the seed for Closed Doors.

What if a lonely narrow-minded senior Glaswegian woman was forced to spend time with a Roma woman of the same age? And what if it happened to be in one of the glittering saree shops which line the streets around here?

With music being ever present in the neighbourhood from passing cars blaring bhangra to groups of men singing around an acoustic guitar on the street it felt important that music should be integral to the story so I approached Audrey and Lauren of Novasound whose work creating music for theatre and film I really enjoy. Together we set about creating characters and building a narrative.