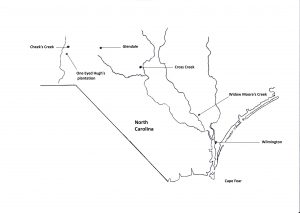 After traveling up the North West Cape Fear River, Flora and Allan procured a plantation at Cheek’s Creek and settled there. Almost immediately Allan was caught up in the American War of Independence because he was seen as a leading man amongst Highanders in the area, largely thanks to his wife being a Scottish celebrity. Taking advantage of the fact that many Highlanders had learned the hard way what happens when you rebel against the British government, Allan raised an army for the Loyalists.

He marched with them in the direction of the coast where they believed the British were sending reinforcements. On the way they met a Patriot army at nightfall at Moore’s Creek and decided to cross the creek to force them into retreat. However, the Patriots had seen them coming, removed the planks from the bridge and greased the wooden beams. As it was dark the Loyalists couldn’t see this until it was too late. Many of Allan’s regiment were killed and Allan and his son Alexander were taken prisoner. Flora didn’t see them again until two years later.

During these two years Flora was left in charge of the plantation which was regularly ransacked by Patriot militia. She felt responsible for the other women left behind after Moore’s Creek and took it upon herself to visit them, as her husband had been the one leading their men away. On returning from one of these visits she fell from her horse and broke her arm. The only doctor nearby had been taken prisoner with her husband so, without treatment, her arm never properly healed.

“I fixed my thoughts on seeing my native country, though in a tender state.”  – Flora MacDonald

Eventually her son in law, Glendale obtained safe passage to get Flora, Anne and their children out of North Carolina to New York. Annabella seems to have stayed behind in North Carolina to tend to her father who was nearing the end of his life. Anne decided to go back to Skye while Flora stayed on in New York before following Allan to Nova Scotia where their sons Charles and Ranald were also stationed with the Royal Highland Regiment there.

The following summer Flora slipped again and broke her other arm. Her health had been suffering for several years now and rather than face another bleak Nova Scotian winter, she decided to return to Skye without Allan who wanted to stay on rebuild the Loyalist forces. There is a story about an attack by pirates on the ship on which she was travelling home. It is almost certainly a fabrication but Flora’s arm was broken again on the journey back to the UK.

Flora was reunited with her son Johnny in Edinburgh and then her two daughters when she got back to Skye. She received news on her return that boats carrying Alexander and Ranald had been lost at sea. She was very fragile by now, penniless and reliant on her children to look after her. Flora’s half-sister Annabella returned to Skye a year after Flora did and Allan returned a couple of years after that. Both Charles and James eventually returned to Skye and took up land there.