“I fear she will get no sugar where she is going.” – Bonnie Prince Charlie

An uncanny cloud of celebrity descended upon her almost as soon as she was arrested.  While other captured Jacobites were being beheaded for treason, Flora had a largely comfortable imprisonment and seems to have charmed everyone in charge of her fate. There is the story of her telling the Prince of Wales that she would have done the same for him, had she found him in distress. Clan honour meant she should never turn away someone she could help.

Perhaps her humble naivety was completely genuine and simply a fortuitous character trait given the political climate at the time. Perhaps she was playing the cards that had been dealt to her and had worked out that she had more chance of surviving with her life if she allowed her gaolers to believe her to be a good girl who just did what she was told. Perhaps it was a bit of both. Either way it worked. Jacobite sympathisers raised a fortune for her and after her release she went back to Skye a rich woman.

She then married Allan of Kingsburgh, whose father had been a key player in Bonnie Prince Charlie’s escape route through Skye. Allan had been a Redcoat during the previous years and was now full of plans for the land they had in North East Skye. Over the next fifteen years Flora had seven children and made a home at Flodigarry but not long after the birth of her final child, the life they built began to crumble. 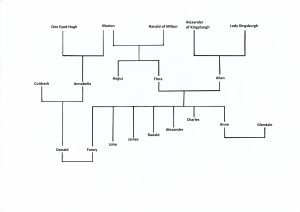 A cattle plague followed by the Black Spring had devastating effects on Skye. The new clan chief kept raising the rent and Allan, already unpopular because of his enthusiasm for evolving farming methods, as tacksman, was forced to ask the starving tenants for more money. He had also spent the fortune raised for Flora and could not get credit. He sank into depression.

“Of this family there will soon be no remembrance in this poor miserable island.” – Flora MacDonald

By now news was filtering back from the colonies about a prosperous life in the New World and Flora’s half-sister and step father, along with many others emigrated.  Once army commissions had been secured for two of her sons, another being at school in Edinburgh, Flora and Allan prepared to leave Skye with their remaining two sons, eldest daughter and son-in-law. Their youngest daughter was left behind with family. The journey to North Carolina took eight weeks.