In late spring 2019 I was awarded the ICONS commission at Perth Museum and Art Gallery to realise a creative response to the portrait of Flora MacDonald that is on display there as part of the Jacobites exhibition. The work created through this commission is on display at the Museum from July to October 2019.

The installation consists of a series of imagined letters written by Flora to her half sister at various stages of her life, accompanied by a dance film choreographed by Danielle Tyrer.

Flora MacDonald is largely remembered as the rebel heroine who helped Bonnie Prince Charlie “Over the Sea to Skye” as he was fleeing the government forces hunting him down after the Battle of Culloden. There was a lot more to her life than this relatively brief encounter with the Jacobite prince and although she was famous for it both during her lifetime and afterwards, her involvement in the plan was arguably not best described as rebellion.

Her clansmen were playing both sides – marching with Hanoverian troops searching for the Young Pretender while secretly developing a plot for his escape.  Flora was in the right place at the right time, visiting her brother on Uist and returning to Skye to her mother’s house. Her step-father was in charge of one of the government militia on the island and he provided her with a pass to travel, taking a spinning maid with her…

The journey itself involved several close shaves where they were nearly caught and even fired at by militia, but eventually they landed on Skye and Kingsburgh accommodated them at his house. Flora accompanied the Prince as far as Portree where they parted and she never directly heard from him again. 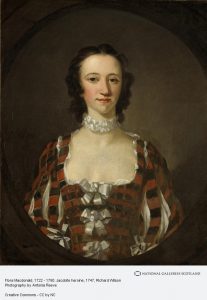