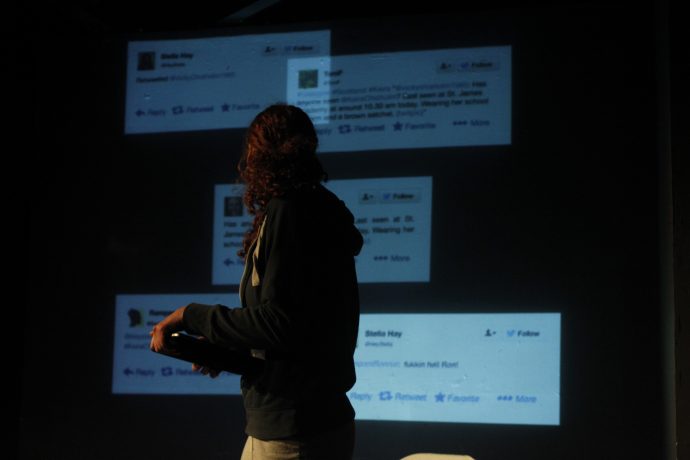 On 5th Sept we staged a work-in-progress performance of Shame to an invited audience in the Circle Studio at the Citizen’s Theatre. It had been a busy few months since we started the R&D period in June.

We were now working from a much tighter script, intersecting live performance with projected digital content and working collaboratively with video designer Tim Reid to find the rythym and pace in combining the two . As as writer it was very satisfying to see the mix of footage and digital content I had imagined since first sketching out the idea two years ago now a reality.

This was the first time I had ever performed a solo show. It didn’t strike me until relatively late on that this was actually quite terrifying. They were words I wrote, I had no excuse not to know my lines…  We’d had the opportunity to share some of the work with our steering group and had some industry guests at the dress rehearsal so I had had the first experience of performing my own text in front of new eyes already. On the night though, there were rows and rows of audience members.

We were lucky enough to have a very responsive pilot audience. Made up of industry guests, collaborators, steering group members and supporters of the project, we had invited an audience we believed we could receive valuable feedback from. The live text is direct address and although, thankfully, the audience we able to laugh at the comedy in the piece, given the subject matter which it covers (revenge porn, missing teenager, trolling) sometimes I was looking out at an audience with pained or uncomfortable expressions. It was useful to have a Question and Answer session after the sharing in order for me to fully establish that these grim expressions on the faces of audience members were as a result of them being drawn into the drama of the piece rather than their dislike of the piece as a whole!

We received lots of postive feedback from our pilot audience including:

“The sense of anxiety was created beautifully, the message was painfully clear.”

“I will be thinking about the last hour for ages to come.”

“I enjoyed the harsh language and brutality of the live feeds that assaulted my sense of decency and forced me to look at those feelings.”

As well as asking for constructive feedback we were also keen to monitor how sensitively the piece seemed to be handling the subject matter. We asked our pilot audience if there was anything they felt upset or offended by. The feedback we received in this area can largely be summed up by the following quotes from audience members:

“I find anything about young people in vulnerable situations or harm upsetting anyway. But I think this type of play needs to be out there for young people to see.”

“It was certainly harrowing, it as should be given the material, but not offended by it.”