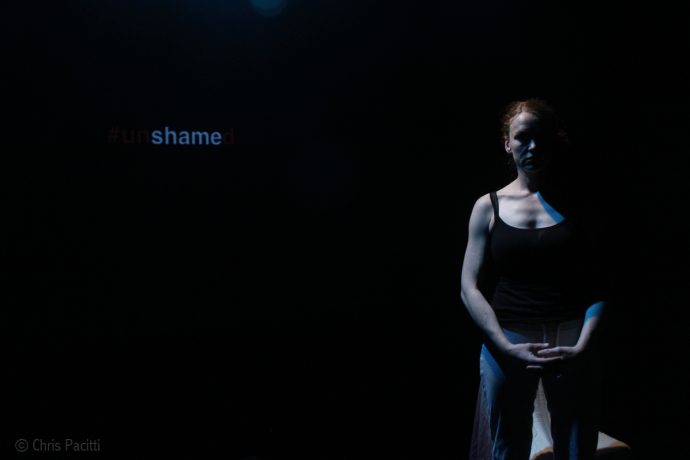 After spending a week at the Playwrights’ Studio in July working on the text, we spent last week at the Citz working with a projector and screen for the first time, putting the visuals and live text together, experimenting with style. The mixture of live narrative and digital content was always intended for this piece and this week is the first time we have been able to properly experiment with that. As well as playing with how the live text is performed in the space we also explored how the live character (Vicky) interacts with the projected media, and also her relationship with her own “technology” (a tablet and a smart phone) on stage.

As we’re getting further into the development, redrafting is a daily occurrence. We’re tightening the plot and discovering how the tension in the story builds, snipping away extraneous threads and inconsequential characters. Bringing different characters to life on stage, solo, (as opposed to on the screen) and timing this to fit in with the audio of pre-recorded video footage requires a significant amount of concentration, precise direction and the time and space to practice. We have another week of R&D to get things slick, however, we are aiming towards a work in progress sharing rather than full production so there is still plenty of room to try things out.

We have some great music for the piece composed by Pauline Morgan who also composed the music for REaD. The sounds she has created perfectly compliment the story we are telling and provides a powerful underscore to the drama unfolding.

The aesthetics for the visuals have developed from an originally rather literal imagining of the digital world to one of a more fluid and mutating presence, giving a sense of the murky, intangible effect instant technology has on our consciousness.